Custom made caravans designed for the retro lover 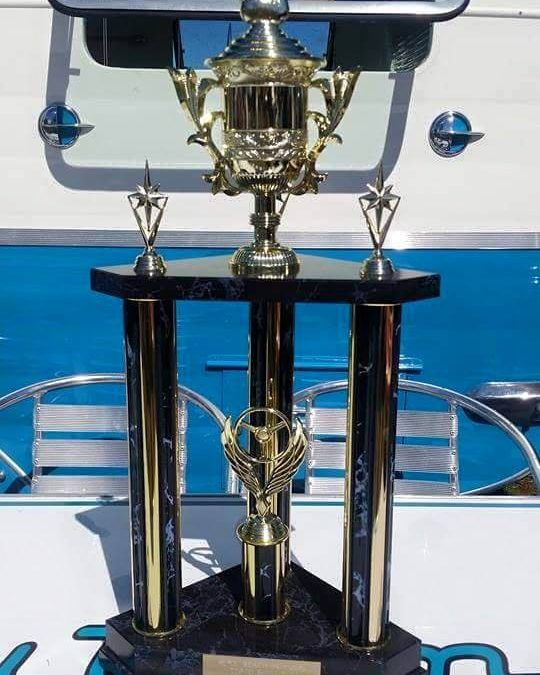 When beginning a new venture like Retro Custom Caravans, based on building and restoring retro styled caravans, it pays to have a solid grounding and foundation skill in a related field. Fortunately for Mike Wells he was already well known in the American car and hot rod scene, so when he embarked on his new adventure of building and restoring caravans, the connectivity was obvious.

From cars to caravans – it began simply and grew

A product of the apprenticeship system, Mike began painting at the ripe age of 16 and from that day to this, he has worked on a huge range of cars, boats and heavy machinery, but it wasn’t until fairly recently that Retro Custom Caravans came to light.

Mike started his first caravan commission in 2010 and had so much fun doing it – he was hooked.

Restoring cars provides very limited room for change and Mike discovered that a caravan is basically a blank canvas with endless possibilities. As he worked on his first caravan, the creative juices began to flow and he soon realised he wanted to create another one – this time for himself.

With so many new and exciting ideas running around in his head, Mike set out on the hunt for the right project, stumbling upon the bones of Get Rhythm in Tauranga.

It was a rundown old wreck needing a lot of work which was exactly what he wanted, something he could shape and mould with a blank palette to create his own vision of perfection.

Getting a caravan to the end line requires a number of steps along the way, least of which is the first task of getting it roadworthy and legal.

Let’s get this show on the road

The caravan had been left to years of neglect and was in a sorry state of repair. However, after a few weeks in Mike’s care, the caravan had well and truly begun its period of transformation, so much so that she was off on her first road trip to Kumeu Classic Car and Hot Rod Festival.

After the Kumeu debut, Mike threw himself into the project, spending countless nights getting the caravan how he envisaged… not only a mobile billboard for his business but also a home away from home that provided all the creature comforts.

The caravan’s debut as a completed vehicle was at the 2012 Beach Hop.

People who saw it just couldn’t believe that it was the same caravan Mike had brought to Kumeu the previous year.

Celebrating the culmination of weeks of hard work that ended in the completion of a perfectly executed refurbishment full of retro charm, Mike christened her that weekend with lots of beer, loud music and great company.

Testament to the caravan’s charm and perfect execution is the fact that on the first day, more than 2,000 people went through the caravan, with nothing but excitement and great feedback from everyone.

To top it all off, Get Rhythm won the best retro caravan award that year too.

What then for Get Rhythm?

With some interest it went viral, appearing in many different magazines and on websites and has since become a Beach Hop regular.

Built for fun, Get Rhythm is tough enough to accommodate a gaggle of people and allegedly, after a night of partying was able to handle 13 people dancing up a storm on the dance floor.

Fully functional with sleeping spaces, it is self contained, complete with power and running water. Mike has proved that his custom made caravans are one of a kind, functional, fun and limitless in creativity.

When the partying is over, the rear couch pulls out into a double bed and the table goes down, creating a king single sleeping space.

Then there is the bar which soon becomes the centre stage and the perfect place from which to shelter from the sun.

If you are looking for a caravan that is solid, functional, nostalgic and full of retro charm, let Mike work his magic and re-design for you a unique and awe inspiring space that will easily become your preferred home away from home.